The Vicat group has today reported sales of €1883 million for the nine month period to 30 September 2015, up 1.9% compared with the same period of the previous year.

Commenting on these figures, the Group’s Chairman and CEO said: “Vicat’s third-quarter performance reflects a still contrasting picture from one region to another, but there were signs of improvement in certain markets. Strong increases were recorded in the United States and Turkey, while volumes in India returned to growth in a still favourable pricing environment, and, lastly, our production unit in Kazakhstan ran at full capacity in a market nevertheless affected by a strong currency devaluation. In France, the shortfall compared with 2014 declined significantly in the Cement business over the past quarter, and the market currently appears to be gradually stabilising at an historically low level for French cement consumption. Against this backdrop, Vicat remains focused on its objectives of maximising its cash flow and reducing its debt, while leveraging the efficiency of its manufacturing facilities, its geographical diversification and its strong positions in its local markets.” 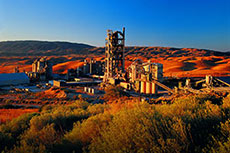 Vicat, France, is in the advanced stages of buyout discussions with Bharathi Cement, India.