The Markit/CIPS UK Construction Purchasing Managers’ Index® (PMI®) for October was 61.4, down from September’s 64.2. The decline has been attributed to a slower pace of expansion – the lowest since May 2014. However, it should be noted that overall construction output increased in the UK and that the index remained above the neutral mark of 50.0.

Highlights from the report

“October’s survey provides the first indication that the chill winds blowing across the UK housing market have started to weigh on the booming residential building sector,” commented Tim Moore, Senior Economist at Markit and author of the Markit/CIPS Construction PMI®. “House building activity still increased at a strong pace overall, but the sharp growth slowdown since this summer reflects greater caution towards new development projects amid tighter mortgage lending conditions and renewed uncertainties about the demand outlook. Despite signs that the house building recovery has lost some intensity, UK construction companies remain highly upbeat about their overall prospects for growth. Survey respondents cited a broad-based improvement in domestic economic conditions and rising investment spending patterns as key factors likely to support construction output over the year ahead.”

David Noble, Group Chief Executive Officer at the Chartered Institute of Procurement and Supply, added: “Though it appears that the euphoria of the last few months is now settling down to a slightly more modest level of expansion, delivery times continue to lengthen and suppliers of raw materials are in high demand, making the completion of construction projects more challenging and showing how the number of available suppliers has not yet reached pre-recession levels.”

Sales volumes of ready-mixed concrete, asphalt, crushed rock, sand and gravel increased in Great Britain in both 3Q14 and the first nine months of the year. 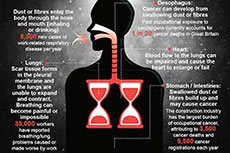 Arco has created an infographic that highlights the health risks posed by construction dust.

The targets include a 40% cut in greenhouse gas emissions by 2030 compared to 1990 levels and an EU-wide binding target for renewable energy of at least 27%. 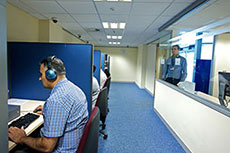