In March, Buzzi Unicem SpA announced that it had submitted an offer to acquire a 99.5% interest in the share capital of Sacci SpA, an Italian cement producer operating the in the central and northern parts of Italy. On 30 April, Buzzi informed that the population of the banks and creditors that take part in the debt restructuring agreement pursuant to article 182-bis of the Bankruptcy Law have not endorsed to proposal. The offer expired on 30 April and as such Buzzi Unicem is released from any subsequent commitment.

Sacci is currently involved in a debt-restructuring agreement. The company has a market share of approximately 6% and is vertically integrated. It holds minority active investments in Cementerie Aldo Barbetti SpA and Cementeria Constantinopoli Srl.

Read the article online at: https://www.worldcement.com/europe-cis/05052015/buzzi-unicem-will-not-acquire-sacci-spa-785/

Buzzi Unicem has made an offer to Sacci shareholders to acquire a 99.5% stake in the company, which is currently involved in a debt-restructuring agreement.

In 2014, the company reported good sales growth in the US and Czech Republic, moderate progress in Central Europe and a stable trend in Russia. 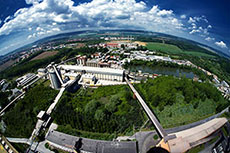 In the second part of this abridged article from the January 2015 issue, Buzzi Unicem’s Giovanni Battista Auxilia and Stefano Comoglio outline the different stages of a recent AF project at Cement Hranice.

Buzzi Unicem outlines recent modernisation projects to increase alternative fuels storage and handling capacity at Cement Hranice in the Czech Republic in this abridged article from the January 2015 issue.