When segregation occurs it can manifest itself differently depending upon the characteristics of the blend or the process. Typical problems arising from segregation can include weigh variation through a batch, strength variation, poor mixing performance, and imbalances of key ingredients. For many plants, this variability can range from ‘acceptable’ to bad enough to reject considerable proportions of the batch – or to prompt complaints from end users! One of the most common forms of segregation is when materials loaded into vessels tend to form a heap under the loading point. The finer (or less free flowing) elements of the blend will tend to be relatively immobile and concentrate at the centre of the heap, whilst the coarse (or more free-flowing) elements will tend to move down the slope and concentrate at the periphery. Thus the deposited material will exhibit inhomogeneous characteristics over the cross-section of the vessel. Clearly, this type of de-blended deposition has implications for any sampling protocols in use at the plant, but can also lead to quite dramatic shifts in blend in sack filling operations. In many situations it is quite common to find that the pack weight (for example) will drift from a high weight at the start of a batch and gradually drift towards a low weight – this is a typical scenario for systems that feed volumetrically. The reason for this drift is that most vessels will tend to operate with a flow pattern known as core flow. This flow behaviour is usually recognisable by the presence of a preferential draw down of material that extends from the feeder to the top surface (with non-flowing regions held off the flanks of the vessel until drain down occurs). The effect of this flow pattern is that the central region (nominally fines enriched) is drawn down at the start of the batch, whilst the material on the flanks (nominally coarse) is drawn down towards the end – thus bulk densities (or blend compositions) shift in response to which part of the vessel or big bag are active at the time.

The presence of segregated material in the process is often considered by many to be the result of pneumatic transfer systems. The reality is that the most significant effects will develop in feed hoppers (even if loaded directly from batch blenders) at the start of the conveying system and in the receiving bins at the end of the line. A key consideration relating to receiving bins is the configuration of the incoming pipework, as this can dictate how the conveyed material is deposited. Earlier in this article the most common type of segregation was explored; however, if material is loaded into a bin through a pipeline that is interfaced tangentially to the vessel, scope will exist for the material to decelerate through contact with the walls. In this respect certain parallels can be drawn with the mechanism of particle disengagement found in cyclones – except that in this case the deposit of material is allowed to grow within the vessel. This method of filling creates a deposition that can be the inverse of that occurring with gravity filling (i.e. the finer material will be less evident towards the centre line of the vessel).

If the conveying line is interfaced vertically downwards into the vessel (as is commonly the case for external silos receiving material from road tankers), the high velocity blast of conveyed material will tend to interact with the already loaded material as the inventory level rises. This will compound the tendency for finer particles to settle less slowly from the air convection effects that develop when filling silos in this way, which can turn the headspace of the silo into a large gas classifier. The resulting (progressive) distrainment of particles from the air will lead to a segregation effect whereby the material becomes stratified by particle size. If a conventional vessel has this type of deposition and discharges in core flow, the process will initially receive a fines-deficient material (as the central core is drawn down) followed by a rapid increase in fines content as the upper strata containing the fines is brought into the flow channel. It goes without saying that trying to maintain a stable process when the incoming material is subject to high levels of variation can be extremely challenging.

Clearly, an introductory article such as this can only provide a ‘snap-shot’ of the mechanism and issues associated with segregation. However, the most important point to be made is that, in many cases, substantial improvements can be brought about through the implementation of relatively minimal process changes to hardware or operation. Methods for measuring the propensity of blends or raw materials to segregate can be undertaken offline, the results of which can provide useful pointers to determine the most cost-effective remedial actions to implement.

This is an abridged excerpt from the article ‘Does Your Bulk Storage Scheme Design Stack Up?’ by Richard Farnish, which was published in the June issue of World Cement. To read the full article, subscribers can download the issue by logging in here.

Read the article online at: https://www.worldcement.com/europe-cis/03062015/does-your-bulk-storage-scheme-design-stack-up-part-two-928/

Lafarge North America, Inc. is investing in a new cement storage facility and terminal in North Dakota to enhance its logistics network and meet rising demand in the region.

The Long Beach Board of Harbor Commissioners has granted approval for the Mitsubishi Cement facility modification project at the Port of Long Beach in California. 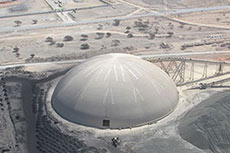 Geometrica describes some of its Freedome® projects in the UAE and Turkey.