On 2 March the Board of Directors for FLSmidth & Co. A/S allocated performance shares to the Executive Management and key staff (140 persons in total).

The maximum number of performance shares allocated is 177 790, of which 34 142 pertain to Executive Management. The vesting period is three years, and vesting will depend on fulfilment of stretched financial targets. The applicable financial targets are EBITA margin and net working capital ratio, calculated as three-year averages.

The cost of the programme is DKK 44 million in case of full vesting, based on the average closing share price from 12 – 18 February 2016.

Primarily, the purpose of the programme is to retain key staff and to align the interests of shareholders and participants by rewarding performance in accordance with the long-term strategy and financial targets.

Read the article online at: https://www.worldcement.com/europe-cis/03032016/flsmidth-allocates-performance-shares-613/

Samir Sabry, BMIC Cement Company, relates the difficulties associated with building a cement plant during the mass uprising of 2011.

FLSmidth A/S and Haldor Topsoe A/S have entered into a cooperation agreement aimed at commercialising their EnviroTex™ catalytic filter bag technology on a global scale.

FLSmidth will supply the major equipment for the modernisation project at Holcim’s Ada Oklahoma plant. 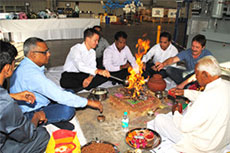 FLSmidth MAAG Gear has inaugurated an assemble and service unit in India.