According to Markit/CIPS, in November, growth in the UK construction sector slowed, with output, new business and employment all rising at slower rates than in the previous month. This signals the slowest expansion of business activity for seven months. Aside from the pre-election slowdown seen in April, overall output growth was the weakest since mid-2013.

Construction companies mainly commented on supportive economic conditions and rising workloads at their units. However, some reports from survey respondents indicated a lack of new work to replace completed projects in November, which acted as a drag on business activity growth. Reflecting this, the latest data indicates a weaker rise overall in new business volumes. Some construction firms also suggested that more cautious spending patterns among clients had weighed on new order inflows. These slower growth patterns across the sector contributed to a moderation in job creation from the 11-month high recorded during October. Although still strong in a historical context, the latest rise in staffing levels was the weakest since September 2013.

In line with the trends for output and new work, latest data highlighted a slowdown in input buying growth across the construction sector, with supplier performance continuing to deteriorate, probably due to shortages and pressure on capacity.

Read the article online at: https://www.worldcement.com/europe-cis/02122015/markitcips-indicates-slowed-growth-in-uk-construction-sector-99/

UK Chancellor George Osbourne has announced plans to build 400 000 homes over the course of the parliament, but will the industry be able to meet this target given the skills shortage? 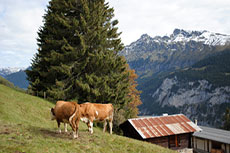 The Swiss construction industry is set to expand according to research by Timetric’s Construction Intelligence Centre.