Caterpillar has been ranked 7th in Woman Engineer Magazine’s ‘Top 50 Employers’ for 2016.

Readers of the magazine selected companies where they would most like to work and those that they think would provide a positive working environment for female engineers.

Data stewardship consultant Cheryl Verbeke has held a variety of roles during her 19 years with Caterpillar, including strategy, analytics, data governance and recruiting, among others.

“I have had tremendous opportunities for growth and development at Caterpillar that are really only limited by my imagination,” Verbeke said.

Part of Caterpillar’s efforts to grow and develop its team is an Engineering Rotational Development Programme, where entry level engineers can experience different engineering roles across the company.

Andrea Osberghaus, an associate engineer in the program said, “What ultimately swayed my decision in Caterpillar's favor were the competitive benefits for entry level engineers, the rotational program, the very positive interactions I had had with Caterpillar employees, the reputation that Caterpillar has and the weight that the brand holds.”

The deliberate focus Caterpillar places on attracting and retaining top women talent has taken many forms, including through the Women’s Initiative Network employee resource group, the Women in Leadership Initiative and the Breakthrough Leadership class for developing mid-level women for more senior roles.

Many Caterpillar women engineers have also showed pride in their professions on social media by using “#ILookLikeAnEngineer.”

Caterpillar’s Director of Diversity and Inclusion Kelly Wojda said, “Caterpillar employs hundreds of female engineers and women in many other technical jobs that have historically been associated with men. #ILookLikeAnEngineer is about challenging the stereotype that women can’t fill those roles.”

Engineering supervisor Priya Vaidyanathan appreciates Caterpillar’s presence around the world and the opportunity to work diverse groups of people.

“When I started my career with Caterpillar, I had great opportunities to work and lead global teams,” she said, “such as to partnering with my extended team in the United States to establish a Center of Excellence in India that provides IT infrastructure services globally.”

Read the article online at: https://www.worldcement.com/europe-cis/02082016/caterpillar-commended-by-woman-engineer-magazine-41/ 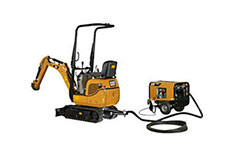 On 18 – 20 May, the seventh annual NASA Robotic Mining Competition was held at the Kennedy Space Center Visitor Complex