A Freightliner class 66 diesel locomotive has been named Poppy in memory of 15 workers from Buxton Lime Firms (now Tarmac) who served and died in the Battle of the Somme. 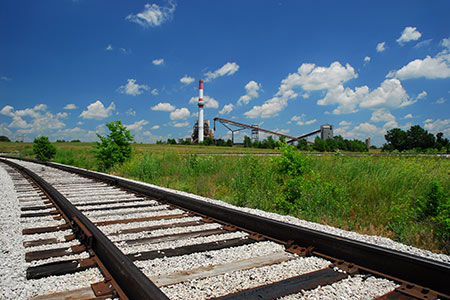 A naming ceremony at Tarmac’s Tunstead Quarry was attended by more than 50 people, including Andrew Bingham, MP for High Peak and members of The Royal British Legion who officially unveiled the engine.

Inspiration for the locomotive name was taken from a large copper poppy sculpture produced earlier this year by three Tarmac Buxton apprentices to commemorate the hundredth anniversary of the Battle of the Somme. An aluminium cast of the sculpture, which was made using 1916 manufacturing processes and features the name of the workers who lost their lives in the battle, has been fitted to the side of ”Poppy” as a lasting tribute.

Commenting on the event, Viv Russell, lime and powders director at Tarmac’s Tunstead site, said: “Tunstead has been a proud member of the local community for more than a century. We’re really pleased to celebrate our local heritage and commemorate the bravery of those men who fought and died in the Battle of the Somme with this fitting tribute.”

Poppy is part of the Freightliner locomotive fleet delivering limestone products over a five-year contract for Tarmac, awarded earlier this year as part of the leading sustainable construction solution company’s expansion of its rail freight operations.

“Freightliner is privileged to partner with Tarmac to pay tribute to the 15 brave Buxton Lime Firms workers who lost their lives at the Battle of the Somme,” said Adam Cunliffe, UK MD, Freightliner. “Naming our Freightliner locomotive 66614 ‘Poppy’ will serve as a continual reminder of the ultimate sacrifice made by many during WW1.”

“In future, this locomotive will be seen hauling Tarmac’s wagons of limestone or cement from Tunstead up and down the country, as we continue to provide a sustainable and economic solution for the transportation of Tarmac’s bulk materials.”

Each year, Tarmac transports around nine million tonnes of material by rail across the UK and the expansion of its rail freight capacity is helping towards the company’s aim of reducing transport carbon by 10% per t by 2020.

Read the article online at: https://www.worldcement.com/europe-cis/01112016/buxtons-battle-of-somme-heroes-honoured-in-locomotive-naming/