With up to 2300 m of rock on top of it, the Gotthard Base Tunnel, which is scheduled to go into regular operation in December 2016, is not only the world’s longest, but also the deepest railway tunnel ever built. Accordingly, the temperatures in the tunnel are very high, with the surrounding rock expected to reach 45 °C (113 °F) once the tunnel is fully operational. Since unrestricted rail operations are only permitted in temperatures of 40 °C (104 °F) or less, the heat has to be controlled with suitable equipment. Large fans developed and built especially for this application by TLT-Turbo GmbH provide fresh air for regular operations as well as during maintenance and repair work. Separate fans ensure that the emergency exits are properly ventilated in case of fire. In addition to coming up with a technical solution that could handle the special challenges of this project, the engineers and planners had to develop detailed preliminary plans as well as a sophisticated logistics and installation concept.

The Gotthard Base Tunnel consists of two 57-km-long tubes, one in each direction. Including all connecting and access tunnels, the entire underground system measures 152 km. At Faido and Sedrun, at approximately 16 and 36 km respectively, two multifunction stations were built that cut each of the two tubes into three sections of roughly equal length. Here, trains can make emergency stops and change tracks, if necessary. This is also where eight large axial fans made by TLT were installed that exchange the air, i.e. they extract a certain amount of heated air and inject the same amount of cool fresh air a few hundred meters farther down the train tracks. In addition to the four exhaust and four supply fans, 24 so-called jet fans were installed along with associated components like silencers, shut-off dampers, drives and lubrication systems from TLT were installed.

In addition to exchanging the air, these fans are used to enable maintenance and repair operations in the tunnel. Current plans call for blocking each tunnel tube for one night per week in order to perform preventive maintenance work, thus enhancing the tunnel’s overall functionality and availability. During these hours, many people will be in the tunnel who require fresh air. “One of the major criteria for winning this bid was the fans’ ability to quickly switch between a wide range of modes. TLT fans are among the best in the world in this regard,” says Andreas Kuhn, TLT’s project manager for the Gotthard Base Tunnel, about the selection of his company’s fans for this project.

In the third potential operating mode, the so-called event case, i.e. a fire, four exhaust fans with a power rating of 2.4 megawatts each extract smoke from the emergency stop. The fans were designed to handle gases with temperatures of up to 400 °C for two hours. To put this in perspective, Kuhn explains that 2.4 megawatts correspond to 3263 horsepower, which means that each exhaust fan has the power of four Formula 1 racecars. If a train reports a fire, for example via sensors that are mounted on the train or in the tunnel, it is routed to the nearest multifunction station and instructed to make an emergency stop. Following a sophisticated evacuation system, passengers can exit the train at the emergency stop and escape to secure areas. To keep the emergency stations from filling with smoke and enable passengers to take refuge in separately ventilated, secure tunnel areas, the four supply fans with ratings of 1.5 megawatts each are used, each of which can inject 275 m3 of fresh air per second into the protected areas.

During normal operations, the system controls only the temperature in the tunnel. During maintenance operations, the system controls what is called the dry temperature, i.e. the combination of temperature and relative humidity. The exhaust fans must run at top speed if a fire breaks out, so that they can extract as much smoke as possible. The supply fans, on the other hand, must run at top speed in a specific maintenance scenario, when many people are present in the tunnel. In this mode, the supply fans are operated in parallel to inject 420 m3 of air per second. The amount of air being moved by the fans is adjusted in two ways: via a speed controller with frequency converters, and via the blade controller, which uses hydraulic pressure to adjust the fans’ blade angles while they are rotating.

Read the article online at: https://www.worldcement.com/europe-cis/01082016/tlt-turbo-work-on-gotthard-base-tunnel-part-1-34/

Sika waterproofing technology has been used in the Gotthard tunnel project 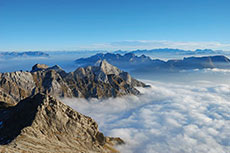 LafargeHolcim plays major role in the completion of the Gotthard base tunnel.

Many BASF products were used in the construction of the world’s longest tunnel. 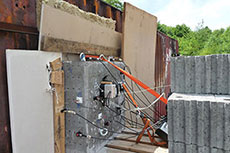