The National Bureau of Statistics of China has revealed that cement production fell by 2.2% y/y to 224.15 million t. However, on an accumulated basis cement output increased by 3% y/y in the first nine months of 2014. In September alone, pig iron production improved by 1.7% y/y, while crude oil and electricity output grew by 9.1% y/y and 4.1% y/y, respectively.

Value-added industrial output improved by 8% y/y in September. The total value-added output of the mining and quarrying sector rose by 3.9% y/y, manufacturing was up 9.1% y/y and the production and distribution of electricity, gas and water increased by 2.8% y/y.

As noted by BIMCO, changes in the size, growth rate and composition of the Chinese economy impact the global shipping industry and alter the demand for seaborne shipping services.

“As the signals from a wider range of indicators tells us to be cautious, today’s news is only somewhat comforting. A ‘new normal’ is about to arrive in China too, with a change to shipping demand as we know it today, likely to follow in the wake,” said Peter Sand, Chief Shipping Analyst at BIMCO. “The sheer size of the Chinese economy, being the world’s second largest, makes 7.3% growth significant.”

Read the article online at: https://www.worldcement.com/asia-pacific-rim/22102014/chinese-cement-output-fell-in-september-2014-711/ 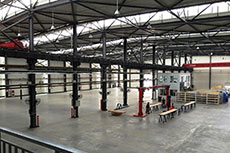 Haver Technologies in Tianjin has a new office, bringing it closer to customers and decreasing delivery time.