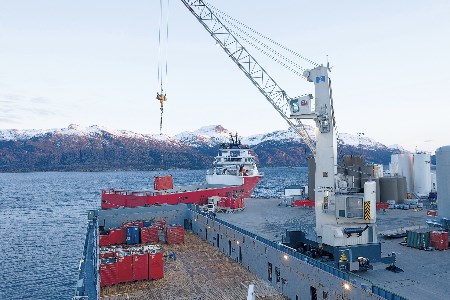 In spring 2017, Terex Port Solutions (TPS) will supply a Model 2 crane to the Port of Otake in the south of the country. There, the machine in the G HMK 2204 two-rope variant ordered via Chikuho Seisakusho Co., Ltd. (CS) will handle mainly containers and general cargo. For this purpose, the new crane has a lifting capacity curve adapted to Japanese requirements with a maximum lifting capacity of 62 t, an outreach of up to 40 m and a maximum lifting speed of 85 m/min. The machine is also equipped with a second, specially developed load display in order to meet the relevant requirements for the safe load indicator in the Japanese market.

The crane will contribute to a long-term increase in handling volumes in the port located on the Seto inland sea. Makoto Aso, President, CS: “Otake is a major port for the steel and chemical industry located in the region. Thanks to steadily increasing production, the handling volumes have risen constantly over the past few years. The favorable geographical location has also contributed to this.” In Otake, vessels in both national and international traffic are served. Aso: “Otake plays an important role in Japanese domestic trade and is also a hub between Asia and the Pacific area. This potential will be even better utilized with the new crane.”

Andreas Moeller, Sales Director Harbour Cranes, TPS, is delighted about another important stride taken in Japan: “The machine for Otake will be the first crane of our harbour crane Generation 5 in Japan, and follows the nine HMK 170 E cranes of Generation 4, the predecessor of Model 2, which we have delivered there over the past 13 years.” TPS will also celebrate a small milestone when the crane is put into operation in the spring. Moeller: “The G HMK 2204 will be our tenth mobile harbour crane in Japan. The first HMK 170 E mobile harbour crane went to the Port of Karatsu in 2003. With the new machine, we will be represented in a total of nine ports spread throughout the whole country.”

Read the article online at: https://www.worldcement.com/asia-pacific-rim/12122016/tenth-terex-gottwald-mobile-harbour-crane-for-japan/