Read Part One of this article here.

Being one of the largest cement manufacturers in Pakistan, Lucky Cement is the only cement brand that sells nationwide (i.e. to both the North and South regions). Besides producing and selling locally, LCL exports its products to 11 other countries internationally. Furthermore, it is also on the forefront of innovation and technological advancements. This has enabled the company to set up its own captive power generation units, which provide electricity for its operations, as well as selling to local utility companies.

With a production capacity of 7.75 million tpa, LCL reached an important milestone in 2002 by becoming the first Pakistani company to export sizeable quantities of loose cement and, thereby, continually bringing in foreign reserves to the country and sustaining the currency to avoid further devaluation. Today, Lucky Cement is the only cement manufacturer to have its own loading and storage terminal at Karachi Port, and is listed on the Karachi, Lahore, Islamabad and London Stock Exchanges.

Pakistan is one of the top 20 producers and the eighth leading exporter of cement in the world. With the global cement market constantly expanding, there is a huge opportunity for Pakistani cement manufacturers to export their products to the Middle East, Africa and developing countries in other regions.

Lucky Cement has recently started operations in Iraq in an effort to meet the immense demand in the country as it rebuilds its infrastructure. The plant, Al Mabrooka Cement, is a joint venture grinding unit located near the port in Basrah. The company is now set to start operations in DR Congo in 2016 in another joint venture cement plant, Nyumba Ya Akiba.

Additionally, Gwadar, a planned free trade port city on the Arabian Sea coastline of Pakistan in the Balochistan province, is expected to help increase exports due to its strategic location and close proximity to the Gulf countries. Even within the country, the industry can greatly contribute to the government’s plan to upgrade infrastructure, constructing dams and providing housing to the poor.

Written by Noman Hasan, Lucky Cement Limited. This is an abridged version of the full article, which appeared in the October 2014 issue of World Cement. Subscribers can view the full article by logging in.

Read the article online at: https://www.worldcement.com/asia-pacific-rim/09102014/pakistans-potential-part-two-629/

The demand outlook for FY15 appears more favourable in India, while Pakistani exports to Afghanistan fell by around 9% in July – December of FY14.

The Pakistani government’s Public Sector Development Programme (PSDP) has provided a boost to the construction sector and helped to increase cement sales throughout the country. 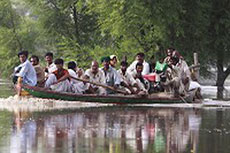 ABB Pakistan Limited is considering establishing a new assembly line in Pakistan and the APCMA has called for a tax respite.