In April 2014, the output of India’s eight core industries grew by 4.2%, compared to 3.7% in April 2013. The principle drivers of growth were the cement, electricity and fertilizer sectors.

Cement production increased by 6.7% in April, indicating a higher rate of growth than last year’s 5.2%. Electricity generation and fertilizer production improved by 11.2% and 11.1%, respectively. At 3.3%, output from India’s coal industry was also higher then in April 2013. Steel production was up 3.1% in April, although this compares to growth of 10.1% in the corresponding month in 2013.

Natural gas, crude oil and petroleum refinery products all saw a decline in growth, with output falling by 7.7%, 0.1% and 2.2%, respectively.

Gujarat Sidhee Cement and Gangotri Cement report a rise in sales for the January – March quarter.

According to officials from Pakistan’s Federal Board of Revenue, the government is likely to raise the federal excise duty (FED) on cement by some Rs.100/t in the upcoming budget. 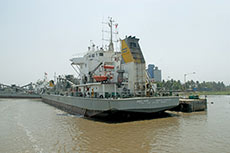 In the second part of this abridged article from the June 2014 issue, Ambuja Cements explains how new technologies have helped to improve supply chain efficiency.

Some key facts on India and its cement sector, the focus of the regional report in World Cement’s June 2014 issue.