In January, Indonesia saw a 13% increase in cement sales, signalling the country’s return to economic growth after a flat period throughout 2009. Analysts expect cement sales to continue to grow in line with the economy this year – at a rate of around 6%. Month-on-month, sales declined 14%, but this is a natural decline for the time of year.

Lower interest rates and infrastructure development will support growth in the construction and cement sectors in 2010. The government is predicting economic growth of 5.5% this year, a 1% increase from 2009’s 4.5% growth.

The holding company will control more than 50% of Indonesia’s market share. State-Owned Enterprises Minister, Mustafa Abubakar, said that the best-performing companies will help the underperforming companies become more efficient. Similar holding companies are planned for other industries, also in the hopes of improving efficiency. The original plan had been to establish these in 2009, but delays over money and legislation have held things up. Semen Gresik reportedly estimates that the plan will cost about Rp.3 trillion (US$324 million) in taxes.

Read the article online at: https://www.worldcement.com/asia-pacific-rim/03032010/indonesia_returns_to_growth/ 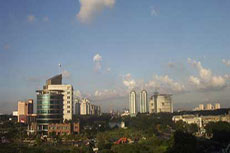 ThyssenKrupp Foerdertechnik, Germany, have signed a contract to supply the Indonesian Semen Gresik Group with raw material processing technology in order to help them meet the expanding demand for cement in Indonesia.