Australia's former prime minister, Kevin Rudd, had announced that his administration was planning to introduce the 40% RSPT on miners' profits, prompting angry reaction from the miners and the cancellation or suspension of a number of planned investments. Of particular issue was size of the tax and its retrospective application to existing projects.

Since Rudd's departure following a surprise leadership election in the ruling Labor Party, Gillard has moved quickly to end one of the most bitter disputes between Government and business in the country’s history.

Under the MRRT, the rate of tax is lowered to 30% and applied to the taxable profit at the resource. The tax will apply from 1 July 2012, but only to iron ore and coal. All other minerals are excluded.

The mining industry has reacted positively to Gillard's proposal. In a joint statement, BHP Billiton, Rio Tinto and Xstrata said that they were encouraged by the federal Government’s decision. The companies agree that the new proposal represents very significant progress towards a minerals taxation regime that satisfies the industry’s core principles.

Commenting on the new proposal, Gillard argued that the new agreement “keeps faith” with the Government's goal of delivering better returns to the Australian people for the country's natural resources, which “they own and which can only be dug up once.”

In his response to the MRRT, Marius Kloppers, CEO of BHP Billiton, noted that only a tax reform that is “prospective, competitive, differentiated and resource-based will ensure that the Australian mining sector continues to grow through investment in the industry which benefits all Australians.” The new proposal is "closer to [these] frequently stated principles of sound tax reform.”

The companies will continue to work with Government to ensure that the detailed design of minerals taxation maintains the international competitiveness of the Australian resources industry into the future.

Regular updates on the mining industry can be found on our sister website energyglobal.com. More on this story in the July issue of World Coal.

Read the article online at: https://www.worldcement.com/asia-pacific-rim/02072010/australia_introduces_mineral_resource_rent_tax/ 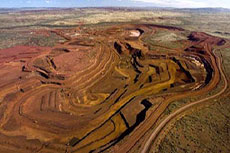 Rio Tinto has begun production of iron ore at the Mesa A/Warramboo mine in Western Australia.