Arabian Cement Co. (ACC) is currently in the process of building a new Brownfield-cement mill in Rabigh, with a clinker production capacity of 10 000 tpd. AUMUND Fördertechnik GmbH has received the order for delivery of a substantial package of machines for the grinding plant presently being constructed in Rabigh.

Depending on their field of operation, the 16 bucket elevators will be equipped with belt or chain and have elevating heights between 22 and 73 m. They will be utilised for the transport of cement from the grinders to the cement hoppers, for the clinker transport, for the charging of the grinders and for the grinder circulation. One of the bucket elevators will be used for charging the grinders with additives (pozzolana, limestone and gypsum). The conveying capacity of the individual machine is between 120 and 660 tpd. Five of the seven deep drawn pan conveyors (axis-centre distance: 50 – 148 m, conveying capacity: up to 800 tpd) will be equipped with baffles. The deep drawn pan conveyor with baffles (KZB-Q type) has been constructed for inclination angles up to 45 degrees and axis-centre distances up to 78 meters. Baffles bolted to the pans and stabilised by catches pressed into the side panels, provide for flexibility and an efficient, reliable transport during conveying up the inclination. With the pan conveyor, conveying capacities between 33 and 1300 m3 per hour and pan widths between 400 and 2400 mm can be realised. The conveyor utilised at ACC Rabigh has a pan width of 1800 mm and will be used for transporting clinker to the clinker hoppers.

As the customer hopes to avoid the use of spillage conveyors, AUMUND developed special discharge chutes with spillways during the laying out the plant. Additionally, special special demands had to be considered – as the optional transfer of the material to two different conveyors needed to be a possibility, the chutes were designed for a capacity of 1200 tph.

The package of delivery was completed by two machines of the CENTREX® type with a diameter of five m for the discharge of FGD gypsum.

Read the article online at: https://www.worldcement.com/africa-middle-east/31032016/aumund-to-deliver-large-order-793/ 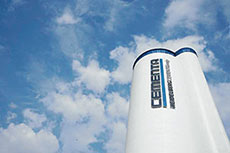 The Copenhagen Malmö Port in Sweden is home to Cementa AB’s multi-compartment silo. Harleigh Hobbs visited the facility to find out how the company stores and distributes its cement across Sweden.

The Turkish company Çimsa Cimento ordered 24 Aumund machines for the mill at Çimsa. 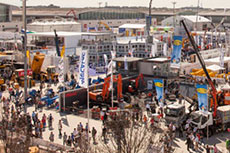 All three Aumund Group companies will be exhibiting at bauma 2016 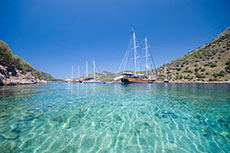 Paul Maxwell-Cook completes his analysis of the economic outlook in Turkey with a review of activity in the country’s cement industry.