Egypt’s Suez Cement has seen a y/y decline in 3Q earnings, with net profit falling 72% according to StockMarketWire. A combination of lower demand and reduced production due to energy shortages contributed to the decline, which is also set against a one-off income effect in 3Q12. Earnings before interest, tax and depreciation fell 42%.

The fourth quarter looks set for continued uncertainty in terms of the political situation, market demand and the energy supply problem, which has not been resolved. Cement companies in Egypt have sought to switch from natural gas to coal to have a more stable fuel supply, but the Minister for the Environment said yesterday she was not in favour of those plans..

Suez Cement is anticipating some improvement from 3Q, citing the ‘restart of public and private construction investments’ as a factor that should boost demand. The Group intends to invest in industrial and environmental efficiency projects, including a move to reduce dependency on gas.

Read the article online at: https://www.worldcement.com/africa-middle-east/30102013/suez_cement_sees_earnings_fall_in_3q13_355/

The Ministry of the Environment has rebuffed the use of coal as a power source in cement plants in Egypt. 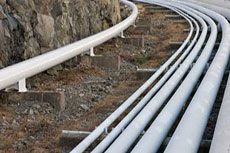