Middle Africa’s cement sector is undergoing the strongest period of sustained growth in its history, with multiple investments across the region to boost production capacity. On a global scale, Sub-Saharan Africa is a marginal cement producer, with output estimated at 116 million t in 2013 – just 2.9% of the world total, reflecting years of underinvestment. However, this situation is changing.

Africa’s cement sector is highly fragmented, reflecting the fact that limestone deposits are common across Africa. Being costly to transport by road, most cement plants sell their output within a 300 km radius and have an operational capacity of no more than 1 million t per year.

Cement production in SSA tends to be concentrated around the main economic hubs in West, East and Southern Africa. Within the last two years, Nigeria has emerged as the continent’s indisputable giant, with total capacity of 28.3 million tpa, around one quarter of SSA’s cement production capacity. Ghana (6.7 million tpa) and Senegal (6.5 million tpa) are also important cement producers, while Senegal and Togo are West Africa’s only significant exporters and Uganda and Kenya are export hubs in East Africa. Ethiopia, with 12.6 million tpa, dominates regional output in East Africa, while Angola has emerged as a major producer in Central Africa (8 million tpa, no exports).

But cement demand is rising rapidly, too

Sustained growth in demand reflects the average 5% pa growth in SSA’s real GDP over the past decade. Per capita cement consumption is significantly below the world average of 500 kg, meaning there is huge potential for growth. Currently, Nigeria is SSA’s largest consumer (~18.3 million t in 2013), followed by South Africa (12.2 million t). Together, these two countries account for half of SSA’s cement consumption.

Meanwhile, Africa’s urban population is expected to rise to 865 million by 2050 and Nigeria, Africa’s most populous country, is facing a critical housing shortage. Accordingly, Nigeria’s cement demand is forecast to reach 35 million t by 2020.

The region’s imports have slumped

Increasing production capacity has led to a sharp drop in cement imports in the region. Nigeria and Ethiopia are particular examples of this, but going forward Angola and Mozambique plan to restrict imports as their own cement production rises.

In the future, the dominant exports in both West and East Africa are set to face major competition from emerging production hubs in Nigeria and Ethiopia, where capacity exceeds demand.

Nigeria’s Dangote Cement is at the forefront of transforming Africa’s cement sector, with an aggressive expansion plan aimed at boosting production capacity in Nigeria and across Middle Africa. Dangote’s strategy is to establish itself in Africa’s underdeveloped markets before its multinational rivals, in order to capture high cement prices before a potential glut sets in.

Dangote Cement aims to add 55 million tpa of integrated grinding and import capacity in 14 countries. The group’s investment strategy underlines its ambition to become the leading pan-African cement company, operating in every continent. 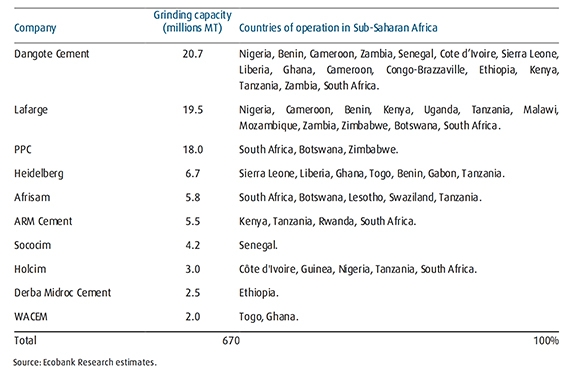 Dangote’s key competitor in Middle Africa is France’s Lafarge. The two companies compete in Nigeria, but Lafarge is more dominant in East and Southern Africa where it is among the top three producers.

Middle Africa’s other leading cement multinational is Germany’s HeidelbergCement, whose operations are concentrated in West and Central Africa. Heidelberg’s largest market is Ghana, where it is the dominant player through its subsidiary, Ghacem, which has a 3.6 million tpa production capacity. Heidelberg is adding 800 000 tpa of capacity to its 1.4 million tpa Takoradi plant, bringing Ghacem’s total capacity to 4.4 million tpa by the end of 2014. Heidelberg is also building a 1.5 million tpa clinker plant in Togo, in addition to a 200 000 tpa grinding plant, and it is entering Burkina Faso, where it will build a 600 000 tpa grinding plant.

South Africa’s PPC is the other significant African player in the sector. PPC aims to increase its sales outside of South Africa to 40% of its total earnings by 2017. With this in mind, the company has acquired a 50% stake in Ethiopia’s Habesha Cement and a 51% shareholding in Rwanda’s Cimerwa. PPC is also investing US$230 million in a 1 million tpa production plant in the DRC, where demand is just 16 kg per capita.

The outlook for the cement industry is positive, but with risks

Africa’s cement producers could face serious challenges to their competitiveness and commercial viability. Perhaps the most significant is the risk of overcapacity. Nigeria’s production capacity is 10 million tpa higher than the country’s consumption and this surplus is likely to surge over the next two years. South African cement demand rose in 2013, but is still significantly short of its current capacity. Ethiopia is also facing a rising surplus, with production surging to 12.6 million t for the year to June 2013 while consumption has lagged behind at just 5.4 million tpa. Moreover, the government has set an ambitious production capacity target of 27 million tpa by 2017, but it is unlikely that the country can generate the 52.5% growth in annual demand required to keep pace with output. Should all the expansions in production across Middle Africa go ahead, the market could quickly become saturated.

SSA’s cement sector is also vulnerable to rising production costs, which are among the highest in the world. Cement companies depend on costly fuel imports for power generation, exposing the sector to volatility in international energy prices. The situation is acute in Nigeria, where fuel and electricity typically account for 70% of production costs, compared with the global average of 30%.

Despite the risks, it is clear that Sub-Saharan Africa’s cement sector is undergoing a dramatic transformation, led by Dangote Cement. Dangote’s strategy of scaling up production of clinker at integrated plants served by plentiful limestone resources (for example, in Nigeria and Senegal), exporting this to new grinding facilities in under-served markets (for example, in Cameroon and Côte d’Ivoire) and then exporting surplus cement to landlocked countries, will allow the company to build a dominating market share in under-supplied markets, as well as help unleash latent demand in these countries.

This article is abridged from a report written by Edward George, Head of Soft Commodity Research at Ecobank. The full report can be accessed here.

Read the article online at: https://www.worldcement.com/africa-middle-east/30072014/middle-africa-cement-sector-explosive-growth-205/

Cement dealers have been accused of hoarding in Ghana, while in Nigeria cement companies increase production capacity and seek to improve their market share.

The new plant will help to meet the shortfall of cement in Ghana, caused by lack of raw materials, power outages and a depreciating currency.

Lafarge will transfer its shares in its Nigerian and South African businesses into Lafarge WAPCO Nigeria Plc, which will then be renamed Lafarge Africa Plc. The new business will have a cement capacity of 12 million tpa.