AUMUND Fördertechnik is strengthening its share of the Turkish market. Çimsa Cimento has now ordered about 60 AUMUND machines for the plants in Eskisehir and Nigde. With five kiln lines in Mersin, Eskisehir, Kayseri, Nigde and Afyonkarahisar as well as a grinding plant in Ankara and two cement packing plants in Marmara and Malatya, Çimsa is one of the leading producers in the Turkish cement industry. Another 41 machines were ordered by Baticim for the plant in Söke. With the arrival of these two large orders AUMUND has now sold more than 150 machines to the Turkish cement industry within one year. 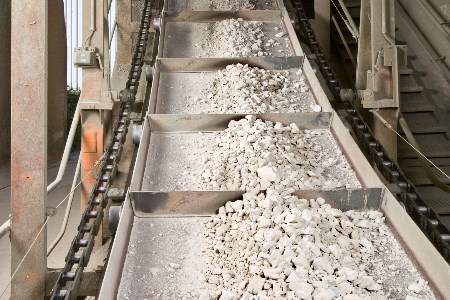 The type of pan conveyor that can convey material in the upper run and the lower run at the same time is only built by two manufacturers worldwide. The material can be discharged by opening any of a number of remotely controlled intermediate stations positioned as required along the conveyor. The AUMUND type ordered for the Eskisehir plant is an SPB, with a centre distance of 42 m and a capacity of 250 tph. This particular model is equipped with three discharge stations.

This pivoting pan conveyor permits material feed into silos through stationary discharge stations. The pan construction allows the material to be distributed between several silos and bunkers. As a result any additional equipment, such as conveyors with their supporting structures and transfer chutes, is no longer necessary.

The order for Eskisehir is completed by three trough chain conveyors.

Read the article online at: https://www.worldcement.com/africa-middle-east/29112016/large-orders-for-aumund/