The production of cement is thought to produce 5% of all global greenhouse gas emissions from fossil fuels and plants. 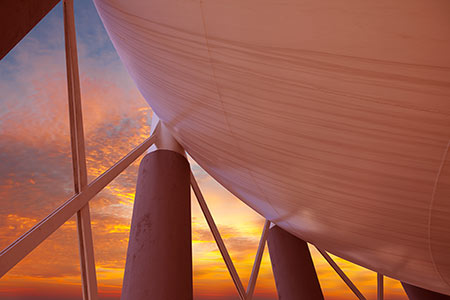 However, this building block of modern civilisation may eventually draw some of that carbon dioxide (CO2) back up—enough to cancel nearly 25% of the gases released making cement, according to a new study.

The production of cement releases copious amounts of CO2 — 50% of cement’s total greenhouse gases. The other half comes from fossil fuels used to heat the cement kilns.

The potential silver lining is that the mortar, concrete, and rubble from demolished buildings can gradually absorb CO2 through a process called carbonation. As CO2 from the air enters tiny pores in the cement, it encounters a variety of chemicals and water trapped there. The ensuing reactions convert the CO2 into other chemicals, including water.

So a team of scientists from the California Institute of Technology in Pasadena teamed up with Steve Davis at the University of California, Irvine, and other US and European researchers. Together, they compiled data from studies of how cement is used around the world, including the thickness of concrete walls, the quality of concrete used in different structures, the life spans of concrete buildings, and what happens to the concrete after the buildings are torn down. The scientists also visited construction sites around China—the world’s largest producer of cement—to get more accurate estimates of a variety of factors that influence how much CO2 the cement absorbs. That included everything from the size range of concrete rubble and how long it was left in the open air, to how much cement was used in thick concrete versus thin layers of mortar spread on walls, where it is exposed more readily to CO2.

The study calculated the carbonation rate in mortar and concrete in different settings — buried, in the open air, and enclosed in a room. The information formed the underpinnings of a computer model that the scientists ran 100 000 times to see how the final estimates changed as different variables were tweaked.

The results cast a different light on the cumulative impact cement has on the climate. The researchers estimate that between 1930 and 2013, cement has soaked up 4.5 gigatons of carbon or more than 16 gigatons of CO2, 43% of the total carbon emitted when limestone was converted to lime in cement kilns.

Because cement effectively cancels part of its impact over time, the results might also help guide strategies for reducing its carbon footprint. Larger gains could come from shifting away from fossil fuels to make the cement.

Read the article online at: https://www.worldcement.com/africa-middle-east/23112016/cement-reabsorbs-greenhouse-gases/