More than 60 participants from the Egyptian cement industry, as well as cement plant members, waste management companies and well known equipment manufacturers from Sudan, Syria, Saudi Arabia, Jordan, Iraq, Germany, France and Oman, participated in the workshop, which was held in El Gouna, Egypt, along the beautiful Red Sea coast.

Ahmad Al Rousan, Secretary General of the AUCBM, opened the workshop by giving an insight into the cement market in the region. Due to increasing environmental awareness and decreasing fossil fuel subsidies in some Arab countries, the topic of using alternative fuels is now a key issue in the industry. “Ten years ago”, he stated in his speech, alternative fuels were an “interesting topic”, but it was too early to think about their use. “Now it’s the time where almost all plants in the AUCBM are starting to develop alternative fuel projects, so regular training courses and workshops regarding this topic are essential to develop the needed knowhow”, he continued. Ahmad Al Rousan welcomed the engagement of the organisers and suggested the establishment of an expert team including cement plant representatives to adjust current guidelines on the use of alternative fuels in the Arab world. 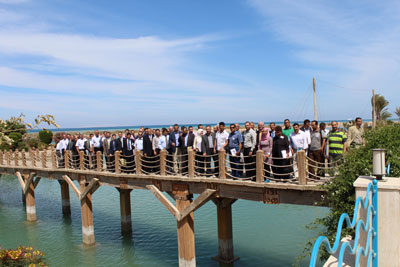 Professor Hanna Ghorab, G&W Science, explained the current political developments in Egypt and their influence on the local cement industry. The government expects additional sources of revenue from selling licenses for the construction of new cement plants on the one hand, and from a reduction of subsidies for fossil fuels on the other.

In the first presentation, Dirk Lechtenberg, MVW Lechtenberg, presented an overview of alternative fuel sources and their current status in the region. Mainly focusing on Egypt, he explained the reasons behind the Egyptian cement industry’s interest in alternative fuels. The withdrawal of fuel subsidies increases clinker production costs significantly. With a total capacity of approximately 55 million tpa of clinker, the sector is mainly using natural gas and heavy fuel oil, which is sold with subsidies at a very low price. In December 2012, the Egyptian government announced that heavy oil prices would go up from EGP1000 to EGP2300 (around €250/t).

At the same time, Egypt is producing huge quantities of agriculture wastes and other forms of waste such as municipal solid waste, which can be further processed and used as an alternative fuel. One example is rice straw. In Egypt, rice cultivation on the River Nile Delta produces large amounts of rice straw as residue. Assuming that about 20% was used for other purposes, around 2.8 million t was left on the fields for burning over a period of 30 days in order to quickly get rid of leftover debris. Egypt is currently lacking a proper method for the disposal of rice straw. Although there are many successful plans adopted by the Ministry of Environment promoting rice straw recycling, there is still a large amount of straw burnt on the fields, which presents a serious health and environmental hazard. Such high production rates should be welcomed by the cement industry since these materials comprise cotton stalks, rice husks and rice straw, which serve as alternative fuels.

However, the use of waste derived alternative fuels is more complicated. Although, for example, Cairo produces some 15 000 tpd of waste, it is not easy for cement plants to obtain this waste as they are in direct competition with the informal sector, which controls approximately 60% of the total local waste. So-called ‘Zabbaleen’ or ‘scavengers’ – mostly young people, who do not have any other option – make their living by collecting and selling waste derived recyclables.

In the following presentation at the workshop, the question of how to produce alternative fuels with adapted technologies was discussed further. 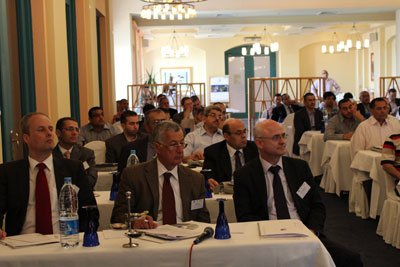 Dr Diller, MVW Lechtenberg, explained the influence of using such waste types in the clinker production process in his first presentation. As the raw materials in Egypt have naturally higher chlorine content, the influence of chlorine was of interest. “What can we do with all the bypass dust that we already produce?” was a key question from the audience.

The lively discussion mainly focused on practical solutions and experiences in contracting alternative fuels, solutions for bypass dust, technical and practical advice as several alternative fuel projects are in the pipeline (e.g. from El Nahda Cement, Wadi el Nile and Assiut, as well as many other cement producers).

‘Practical solutions in the use of alternative fuels’ by Dirk Lechtenberg was therefore a welcomed presentation. The uses of bypass dust for cement grinding and the relevant regulations were discussed in detail.

After an interesting and busy day, a dinner was held on the terrace of the Orient Restaurant. With a view of the Red Sea, this was a welcome spot to further discuss all topics and to exchange information.

The second day started by looking at purely technical issues: ‘Production, storage, dosing and feeding of various types of alternative fuels’ highlighted current experience in the shredding of rice straw and logistic issues. As most of the rice husk and straw is produced during the harvesting period over 6 – 8 weeks of the year, enormous effort has to be done to collect, bale, transport and store such fuels. “Due to the high silica content in rice straw, special welding/surface of the shredder knives is needed, otherwise you can change the knives every few hours at tremendous costs,” Dirk Lechtenberg concluded.

Klaus Rupp, Schenck Process, opened the supplier section of the workshop with an interesting presentation about new developments in the storage, dosing and feeding of such abrasive and light materials. Schenck has developed all-embracing technologies for a wide range of alternative fuels and the new screw press demonstrates how to feed such complicated materials.

Concentrating on its core business – weighing – Thomas Jennewein of FLS Pfister, Germany, presented a wide range of weighing equipment. The rotary weigh feeder is one of the most used weighing tools for alternative fuels in the cement industry and is already used for such fuels in Egypt.

Finally, an overview of the technical knowhow behind burners and burning technology was presented by Serge Launay, Fives Pillard. This discussed issues such as the need for good oxygen distribution for difficult alternative fuels with a high variation in density and particle weight.

Ahmad Al Rousan closed the workshop after handing out participation certificates to the attendees.

Read the article online at: https://www.worldcement.com/africa-middle-east/23052013/workshop_on_alternative_fuels_egypt_overview_991/

Cemex is to collaborate with the Earth Engineering Center (EEC) at Columbia University and the City College of New York for alternative fuels research.