AshakaCem Plc, based in northeastern Nigeria, has reportedly lost more than N4.5 billion due to attacks on its cement plant in Gombe State by Boko Haram. The plant has been robbed and vandalised, losing personnel and machinery, as well as deliveries of ammonium sulfate. Market demand has naturally also fallen, given the unrest.

The security situation in the region has led to work on the plant expansion project being delayed, but the company is still keen to go ahead with this work and to expand its business throughout the northeastern region.

Local government has requested that the company prioritise local employment and CSR efforts, such as building schools, hospitals and drinking water facilities. LafargeHolcim, which owns the company, has approved a new project to provide affordable housing for people displaced by the insurgency.

Read the article online at: https://www.worldcement.com/africa-middle-east/16112015/ashaka-cement-loses-billions-to-boko-haram-attacks-1/ 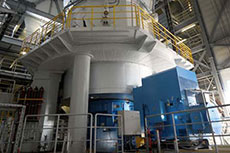 Sinoma International has ordered a complete grinding series from Loesche for its plant in Angola.

An event is being held in Côte d’Ivoire to discuss bridging Africa’s infrastructure gap.

Lafarge Africa has committed to investing N100 billion in the northeast of Nigeria, which has troubled by insurgents.