Qalaa Holdings, which owns ASEC Cement, has reported a 42.5% increase in 1Q15 revenues at EGP1947.5 million. Operational improvements at Al-Takamol Cement in Sudan, a subsidiary of ASEC Cement, contributed to revenue growth of 157% y/y. Together, Qalaa Holdings’ energy and cement sectors contributed 71% to consolidated revenues. EBITDA was also up at EGP275.8 million from 1Q14’s EGP29 million.

Net loss after tax improved 51.6% y/y to EGP122.2 million, in spite of the devaluation of the Egyptian pound against the US dollar. Cement and Construction unit ASEC Holding recorded EGP 78 million in FX losses in the quarter on the back of its dollar denominated ASEC Holding Convertible.

“The year 2015 is off to a good start for Qalaa with our strategic transformation and operational improvements continuing to be positively reflected in the company’s financial performance,” said Ahmed Heikal, Chairman and Founder of Qalaa Holdings. “As was the case in FY14, where Qalaa swung to a positive EBITDA north of EGP650 million, up from a negative a year earlier, we are on-track to meet our previously stated guidance of EBITDA of around EGP1.2 billion by year’s end.”

“At the same time, our bottom line losses continued to narrow in 1Q15. We are well on-track to return to profitability by the end of 2015 on the back of asset sales, disposal of discontinued operations, and a decline in interest expenses as we push through with our ongoing deleveraging program,” added Heikal. “More importantly, we are making significant progress toward the start of operations at greenfield Egyptian Refining Company and raising financing for greenfield Mashreq. At ERC, I am particularly pleased to announce a construction milestone with the raising of the rerun column for the delayed-coker unit. ERC and Mashreq coming online will result in significant improvements to our top line and sustain our bottom-line profitability.”

Negotiations are ongoing for the sale of ASEC Cement’s Algerian operations, including Zahana Cement and the greenfield plant Djelfa. Qalaa remains watchful for other exit opportunities in line with its business strategy.

Read the article online at: https://www.worldcement.com/africa-middle-east/15062015/qalaa-holdings-has-a-successful-start-to-the-year-9/ 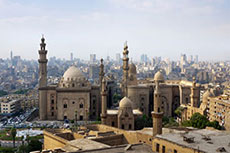 Operational results were good for the Egyptian company, which increased capacity utilisation and sales volumes in the January – March quarter, but net profits fell due to higher costs.

The Egyptian company, which owns ASEC Cement, has been divesting non-core assets as it transforms its business model.

Qalaa Holdings’ Board of Directors has approved a capital increase of EGP1.7 billion, to be primarily funded through the capitalisation of liabilities resulting from the purchase of additional shares in core subsidiaries. An EGM will now be held to approve the increase in paid-in capital from EGP8 billion to EGP9.7 billion.