Part 1 can be read here.

Part 2 can be read here.

The Middle East is the most exposed region to volatility in global energy markets, and the region that can cause the most variation, as seen through Libya’s production fluctuations. A sustained drop in the price of oil below US$50 per barrel could jeopardise the economic stability that many of the region’s energy exporters have enjoyed following the tumult of the Arab Spring.6

Following an overcapacity in oil production (mainly derived to the shale oil production in the US), the leading OPEC producer Saudi Arabia dropped prices under the production costs of some oil producing countries. Coal prices steadily declined in the first few months of 2014 in response to a combination of increased supply and lower import demand from China. Following the oil price drop, coal prices are expected to decline further.

For this reason, it is anticipated that the majority of alternative fuel projects in the Arab countries will be postponed until the fossil fuel prices reach a pre-crisis level. This is particularly the case for Egypt, where all plants are now implementing coal-grinding facilities to switch from natural gas and heavy fuel oil to imported coal, meaning that the use of refuse-derived fuels will be hindered. So long as no gate or treatment fees are received by cement plants, the use of refuse-derived fuels will become uneconomic. However, being independent from world market prices for fossil fuels, there will still be some room for the development of alternative fuel projects. As Rajab El Mahmoudi noted, this may be a few years too early as fuel prices are too low, but it will be the future.

Read the article online at: https://www.worldcement.com/africa-middle-east/07052015/alternative-fuels-in-the-arab-world-part-3-793/

Ed Sullivan, Group VP & Chief Economist, PCA, reports on the upswing in the US economy and the potential impact of low oil prices.

The African Development Bank is supporting the launch of the Africa Energy Leaders Group. 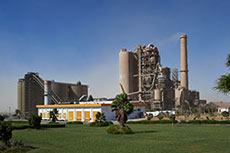 Suez Cement Group of Companies, Egypt, explains how the group is working to advance environmental standards at its facilities across Egypt, in this abridged article from the November 2014 issue of World Cement.

Wolfram Zschiesche and Karl Menzel, Vecoplan FuelTrack, outline the use of alternative fuels and raw materials in cement production. This is part one of an abridged article taken from the February 2014 issue of World Cement.