The web site Africa: the good news provides the lead in for this month’s Regional Insight: “Understanding Africa is difficult. It is all too often described as if it is one country, as opposed to a continent of 53 very different countries, with very different peoples, languages, terrains, economic and political situations, and cultures.” Observers of Africa often take the view that the continent is dominated by those countries that make the headlines for all the wrong reasons. “The 16 year old holding an AK47, or the mother holding a starving child, does not represent Africa’s state,” comments the website, suggesting these and other sad images so often represented in the Western media are not the truth of Africa today. Unfortunately such images linger and make an impact, and often emanate from a number of the 47 countries that constitute Sub-Saharan Africa (SSA). Population growth in Africa averages 2.3%, which means that for the foreseeable future, the continent will have a young population, with more people under 20 than over 40. However, the incidence of HIV prevalence, particularly in SSA, might well create a large number of AIDS orphans and thereby reduce life expectancy. Other facts worth mentioning: while South Africa has over 20 000 km of railway lines, 35 other African countries have 1000 km or less. South Africa has 73 000 km of paved roads, while only 12 others have more than 10 000 km and 13 have less than 1000 km. The same goes for airports with paved runways: while 31 other African countries have less than 10 such airports, South Africa has 146.  The consultancy practice of Frost & Sullivan sums up the situation succinctly by actually stating the obvious, that a lack of infrastructure within the SSA has hampered economic growth and hindered the continent’s drive to be globally competitive and eradicate poverty. Investing in assets that include a reliable power supply and road networks are major among the factors essential for economic growth and stability in 2011 and the years thereafter. 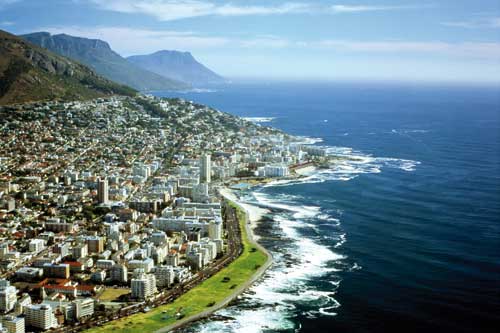 Good to note that change is in the air, with news that as the aftershocks of the global financial crisis begin to subside, investment in African infrastructure development is continuing to rise steadily. This is echoed by the recent research report from Mckinsey that confirms growth in SSA is projected to increase by 3.8% this year and by 4.5% in 2011, faster than Latin America, Europe and Asia! The region is a growing recipient of foreign direct investment made possible through better political and macroeconomic stability, a political commitment to private sector growth and investment in infrastructure and education. “There is a broadly shared conviction among Sub-Saharan leaders that sustained growth will only come from the private sector and increased integration with the global economy,” says the report. The region has tripled its export levels and diversified its trade and investment partners since 1990.

In April of this year, the International Finance Corporation (IFC), a member of the World Bank Group, signed an agreement to invest US$100 million in the African Investment Fund 2, an equity fund established to promote the development of basic infrastructure. The fund intends to raise US$600 million to US$1 billion, which it will invest in unlisted equity and equity-like infrastructure investments in SSA. Key projects will include the building of toll roads, wind power farms and other renewable energy projects, ports, water and sewerage utilities. At about the same time, the IFC signed an agreement with HeidelbergCement to support the development of infrastructure in SSA by increasing the local supply of cement. Under the agreement, IFC and its financial partners will inject equity up to US$180 million in exchange for a minority stake in HeidelbergCement Group’s operations in Africa, in particular in Liberia, Ghana, Togo and Gabon.

You know activities in the construction industry are stepping up, albeit slowly, when news items about the cement industry in SSA begin to regularly appear in the press, including of course at worldcement.com. For example, in recent months there have been regular reports about cement plant expansions in Kenya, Uganda and Tanzania. Uganda is expected to record a robust growth of 6.5% this year following discovery of oil that will spur economic activities, especially construction. Tanzania’s economy is forecast to grow 5% this year, and although down on last year, two cement producers are still moving ahead with expanding plants. A research note from Sterling Investment Bank states, “All the cement companies in East Africa have a combined capacity of about 5.2 million t, while forecasts indicate that the whole region would require 11 million t to meet demand that is growing at an annual rate of 6%”. The latest news from Nigeria’s Dangote Cement, now Africa’s largest cement producer since its merger with Benue Cement, is that it plans to increase its capacity by more than five times by 2015. It will do this through investments in Nigeria and in other African countries. The company’s Chief Operating Officer recently said, “we’re in South Africa, Zambia, Senegal, Ethiopia, Sierra Leone, and we already have terminals in Ghana and we plan to have a grinding mill in Cameroon”.

Major cement plants are either under construction or planned in countries as far apart as Nigeria in the west to Ethiopia in the east, or Mozambique in the southeast to Namibia in the southwest of the continent. All this without so far mentioning South Africa, where market conditions have not been good for three consecutive years. Cement volumes are expected to decline by about 8% this year. There is hope that the market, where there is enormous potential for affordable housing and essential road projects, will recover by the second half of 2011. The situation has not stopped plans for new cement plants to be established in the northwest and at Mpumalanga, and north of Brits in Limpopo. Frost & Sullivan note that, within South Africa, the bulk of IFC investment activity during the short and medium term will be centred on renewable energy, independent power production and a growing list of social infrastructure projects such as hospitals and schools. It is this that could stimulate construction activity in 2011 and beyond.

In 2009, China became South Africa’s biggest trade partner. Not surprising to learn that China is helping to fund one of the new plants in South Africa, as well as other plants in SSA and elsewhere in Africa. In fact, following a major oil deal between China and Nigeria worth US$23 billion, in which China will build three refineries in Nigeria, trade between the two countries is such that China is now Africa’s third largest trading partner  after the European Union and the United States. A working paper released by the Institute of Development Studies in 2007, and a report from the World Bank in the same year, illustrates how China is having a profound impact on African economies. In the last decade the Chinese have built a network of trade, aid, and investment in almost 50 countries. Chinese companies are mining oil in Angola and Sudan, building roads in Ethiopia, generating electricity in Kenya, building infrastructure and encouraging tourism in Sierra Leone and servicing mobile phones in Kenya and Nigeria.

Fifty Years On: A New Wind

In 1960, the then British Prime Minister, Harold Macmillan, during a tour of African countries uttered the memorable and oft quoted words, “The wind of change is blowing through this continent’, a pointed reference, among other things, to the 17 former French and British colonies who went on to gain their independence that year. Now, 50 years on it seems another wind is blowing through Africa – certainly in many of the countries that constitute this huge continent – one that is bringing increased investment, improved infrastructure and better living standards. This is not to say that the problems of corruption, poverty, hunger and the spread of HIV are rapidly being solved, or that there is political stability everywhere in SSA, but as indicated earlier, there are encouraging signs that improvements are on the way, even though they may take many years to filter through and benefit the most affected people. The United Nations has predicted that the proportion of Sub-Saharan people living in urban areas will double to 67% by 2050 from 35% in 2005, with significant implications for productivity, growth and demand, and that creates many challenges for the respective governments.

In this short piece, it is only possible to briefly touch on some of the factors that are affecting this important region of the world. To get a fuller picture, one needs to tune into the experts such as Dr Duncan Clarke, a leading authority on Africa and a leading strategist on its oil, gas and energy industries, plus geopolitics, economics and commercial issues. On 26 November he will present a lecture in London on ‘Sub-Saharan Africa: Business Briefing 2010’ via 750-plus images, on the prospects, potential, future and economic outlook for Africa. If you are in town on that day, it might be worth visiting the Radisson Edwardian Mountbatten Hotel to participate in what is described in the publicity blurb as ‘Africa as Never Seen Before’.