While covering the official opening of Tanga Cement’s new mill last week, the Tanzania Daily News reported that the country’s president, Jakaya Kikwete has challenged the country’s cement producers to continue expanding their production facilities. He said he was pleased that the investment in the new mill had increased capacity from 700 000 t to 1.25 million tpa.

At present there are three cement producers in the country: Tanga Cement, Tanzania Portland Cement Company and Mybeya Cement Company. Their combined cement output is 3 million t, resulting in a surplus of 1 million t. The president has challenged this figure saying that it represented suppressed demand. In his opinion many Tanzanians were still using wood, mud and other materials to build houses, not as a matter of choice but due to the higher prices or non-availability of cement in some places in the country. He urged cement manufacturers to increase efficiency to reduce operational costs and consequently prices of their products. While the government was committed to continue to create an investor-friendly environment in the country, companies had to operate efficiently and compete with imports. He said one of the strategies was improvement of the distribution network by establishing big depots at various centres upcountry. Producers could transport cement in bulk to the depots that are closer to wholesalers, retail outlets and consumers in remote places like Karagwe, Tasrime, or Newala.

The chairman of Tanga Cement’s board of directors, Charles Naude, has revealed that Tanzania is still the cheapest cement producer in East Africa at US$160/t. but ranked third in Africa, after Egypt, US$ 92 and South Africa US$ 134. Ethiopia’s cement costs US$380 /t, the most expensive on the continent.

There are at least four investors planning to establish cement production facilities. The projects are at different stages of implementation. In fact one of the new investors has begun building a plant in the country, and others are said to be in the process of establishing plants in the Coast, Dar es Salaam, Lindi and Mtwara regions. The country has massive deposits of limestone and gypsum, and an expert was recently reported to have indicated that even if annual production reaches 5 million t, it could take up to 150 years to exhaust current deposits of raw materials.

Read the article online at: https://www.worldcement.com/africa-middle-east/01062010/tanzanian_cement_producers_challenged/

Chinese investors are to fund construction of a cement plant in Beluluane in the Maputo province of Mozambique. 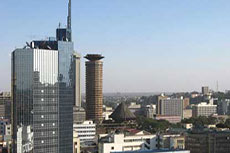 Two Indian-based companies have been given the go-ahead to create cement plants in Pokot, Kenya

The East African Community (EAC) cement market looks set for increased capacities by leading suppliers, which could lead to a fierce price war.

The supply-demand ratio is causing problems for countries that can produce sufficient cement to meet demand, but not necessarily at internationally competitive prices.